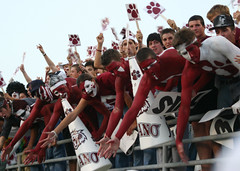 On November 7, Yehuda Katz gave a talk at RubyConf and made 3 major announcements:

The first announcement is pretty substantial. Engine Yard has been financially supporting Merb by letting some of their staff work on Merb, fly them to different conferences and sponsoring events like Merb Camp. Engine Yard didn’t yet announce the price structure but having the option for enterprise level support for Merb is just awesome.

John Nunemaker made an interesting comment during RubyConf Pivotal Party. Something special about Merb is that it was designed to fit the needs of an audience instead of trying to create a series of tools to build a specific type of website. Having Engine Yard help to finance Merb dev and offer support is very reassuring. It’s something already done by many other OSS projects such as Ubuntu, MySQL etc…

The second announcement Yehuda made was about Merb Training. I’m probably pretty biased since I am at the origin of this project. I know for a fact that a lot of people were waiting for 1.0 to get started with Merb. We are also working on getting more documentation out, and 3 books are coming up. Still, the best way to learn is to sit down with people who know Merb who can teach you the way its intended to be used.

Training will allow you to benefit a lot from being with other people who also share the same desire to master Ruby’s most powerful and flexible web framework.

What’s also really exciting is that Yehuda Katz, Merb’s lead developer, agreed to be a tutor for the course. I can’t imagine a better way to learn. Check this page for more information about the next training session or get in contact with me if you want to organize a training session for your company.

Finally, the big news was the announcement of Merb 1.0!

Merb 1.0 went through 5 release candidates and was finally marked as final. In the last few months, the Merb team worked hard to make things easier for people who want to get started in no time.

Let’s quickly look at why Merb is awesome:

“Everyone outside of the Ruby community understands that we only have 1 web application framework, named Rails, but it’s not true in any sense. We have several post-Rails frameworks, which is very good, and I believe in diversity.

Merb has a bright future for the people who are not satisfied by the fixed ways in Rails.Â  I think that Merb will give users more freedom in a Ruby-ish way of programming.

I’m not really a web-guy, so i don’t judge any of them [frameworks], but Rails does some kind of drastic change on the language itself like in Active Support.Â  But Ruby has its own culture and technological atmosphere in the language so that keeping that makes me feel easier.”

“Consider a building with a few broken windows. If the windows are not repaired, the tendency is for vandals to break a few more windows. Eventually, they may even break into the building, and if it’s unoccupied, perhaps become squatters or light fires inside.

I guess I could keep on going with other reasons why Merb is so awesome, but let’s keep some for another post ;)

In conclusion, on behalf of the Merb core team, I’d like to thank all the Merb contributors, Ezra Zygmuntowic (creator of Merb), Yehuda Katz (Merb lead developer), Matz (Ruby creator) and finally DHH & the Rails core team. One more thing: