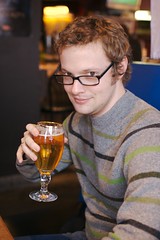 Matt Aimonetti: Hi Hampton, could you please introduce yourself and tell us what you do for a living.

**Hampton Catlin: **I’m Hampton Catlin. I’m “The Haml Guy” as I’m apparently termed all the time when introduced. I’m an early Rails hacker who has done a lot more than Haml, but whatever. These days, I’m doing a ton of iPhone development and am currently heading Wikimedia’s efforts for a new mobile platform… based on Merb!

Matt Aimonetti: How did you get started with Ruby, what’s your background?

Hampton Catlin: Well, everyone is welcome to laugh. But Slashdot introduced me to Ruby. I got into it about two months before Rails because the hotness (it was an obscure project at the time) and I grabbed a copy of the Pickaxe and never looked back. Prior to that I was working a crappy job getting people coffee at a bank. And then prior to that I was doing research for Nasa at my university with Java beuwolf clusters. It sounds fancier than it was.

Matt Aimonetti: You chose to learn and use Merb, could you please let us know why and how that happened?

**Hampton Catlin: **I had known of Ezra for a while and Yehuda. And so when I heard about the project, I was very interested. At the time I was looking forward to using a “Rails Light”. Of course, we know Merb is much more than that, but that was the original attraction.

Also, at some point I got really upset by the use of global variables in both of the frameworks, so I did some major patching to Merb to change over to module based constants. Aka, Merb.root instead of MERB_ROOT. I was ranting about it enough that I decided to do something about it. Also, I did some patches that messed up Merb with some weird documentation stuff. Sorry, Ezra.

Matt Aimonetti: Do you have some Merb projects available online we can look at? what was your experience so far?

Hampton Catlin: My most successful iPhone app (which was recently purchased by Wikimedia) was an app to browse Wikipedia. I chose Merb because I knew that I wanted something a little more bare bones than Rails, and it turned out to be a really good choice. And now, I’m getting a chance to extend that work into an entire platform for Wikimedia mobile. I am still looking for help with it….https://github.com/hcatlin/wikimedia-mobile/tree/master Its not live yet with wikipedia, but that’s the code that you can help with! :)

Matt Aimonetti What is your favorite aspect of the Merb framework?

**Hampton Catlin: **Its modular design. Its as complex or as simple as you would like it to be. Also, its easy to run Haml, and the more people that use Haml, the harder my nipples get.

Matt Aimonetti Could you please mention an aspect of Merb you hope to see being improved in the near future?

Hampton Catlin: Honestly, everyone is wild about gems, but I’m not particularly. I find gem management a bit cumbersome. I’m most likely doing something wrong or not doing it the right way. But yeah, I still find it cumbersome. I’d like to pair the excellent Gem support with better library creation support. I think both are needed. I don’t want to throw stuff in my /lib folder or randomly in my project. I want some structure and some simplicity. Somewhere between plugins and base libraries. I think this is where Merb could shine.

Also, resource handling. I wrote make_resourceful for Rails and I keep needing to do something similar for Merb. m_r is not very popular because I haven’t really put much time into spreading the word. Mostly, I just use it. However, there are about 60 other Rails developers in the world that use it extensively. So, its a small, close-knit group of developers using the tool. And, I think something like it could be much more elegantly mixed into Merb. Obviously its a plug-in, but I think its a low hanging fruit. “current_object” as a method should ALWAYS be around when its logical.

Matt Aimonetti Thank you for your time. Anything else you would like to add?