For Noël, my wife got me a new toy: the Amazon Kindle 2.

Before my wife bought what became my new favorite gadget, we checked on the Barnes & Noble Nook. 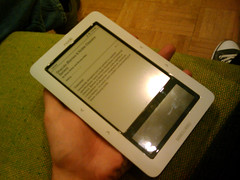 The primary problem with the Nook was that it was out of stock. That pushed me to dig deeper and really compare both devices.

The Nook had some interesting features like wifi, small color screen and the book lending feature.

However, I don’t really care about a small, clunky extra color screen since I just want to read books. The wifi is nice… but what am I going to do with it? Lending books is a cool feature, but this feature isn’t available for all books and is apparently seriously limited.

So I decided to focus on what I really needed instead of what I could use.

From what I read almost everywhere, the nook is slow and a bit buggy (it’s a first generation after all) and doesn’t come with a web browser. I also checked on the ebooks available on Amazon and Barnes & Noble. Amazon has way more ebooks and that’s really what motivated my decision. The other thing is that Amazon is present world wide and I expect them to start selling more ebooks in French and Spanish.

The other thing that pushed me to buy a Kindle was the fact that I know so many people having one and being so pleased. During a recent trip to San Diego, Yehuda Katz told me about how much he loves his Kindle and he recommended a book to read. I started reading the book on my iPhone (using kindle for iPhone) and was really wanted a bigger screen.

A lot of people asked me why I didn’t wait for the big announcement of the iTablet because it might be a Kindle killer.

First, the iTablet is currently just a rumor and if we would believe the rumor, the iTablet will sell around $1,000 vs $250 for a kindle. The tablet will probably do a lot of cool stuff my e-reader can’t do… but I don’t care I chose the kindle because I wanted a simple device to read book and only do that. Actually, the  kindle + iphone combo works great for me. I used to read a lot but because I have been moving so many times I started reading less because I always get rid of my books. Also, when traveling a lot, carrying your books with you is a pain. (especially now that most airlines charge you per bag)

If you want a kindle to read tech books, don’t get a 6”, get the kindle DX instead. Even though the 6” natively supports PDF files, the text is usually too small and the Kindle doesn’t support zooming (yet).

The DX is perfect to read PDFs because the ratio matches the print expectations. I was thinking about converting all the Cocoa docs to a kindle friendly format since the kindle supports search etc.. But the truth is that it’s not worth it. The display on a 6” screen is clunky, it just doesn’t feel right. I didn’t try any of the pragprog ebooks but something tells me they will just look better on the DX.

Since I wanted a kindle to read books and not browse tech documentation, I’m still really happy with 6”.

If you also have kindle or are planning on buying one soon, here are two books I’ve been enjoying reading: