Go aka golang is an amazing language but also a language that is really easy to learn due to its small scope. If you have some coding experience, you will be able to have fully working code in a matter of minutes otherwise you might want to read my free book (WIP).

Very much like with many other programming languages, a challenging part of Go is to learn how to write idiomatic code. The good news is that Go makes refactoring easy (and already has a lot of conventions). I strongly recommend this post from Peter Bourgon about Go at SoundCloud and the extra conventions they follow (Splice also follows the same conventions).

One of my favorite Go projects is the gobot project by HybridGroup. 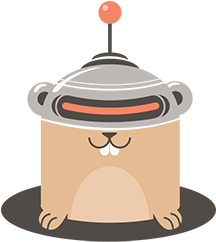 The Gobot project is pretty young and I noticed a few things that could be improved so I offered my help to Ron, Adrian and the rest of the team. Our discussion quickly turned into a fun group refactoring session (featuring @kytrinyx, @deadprogram, @codegangsta, @jnbeck, @adzankich ) 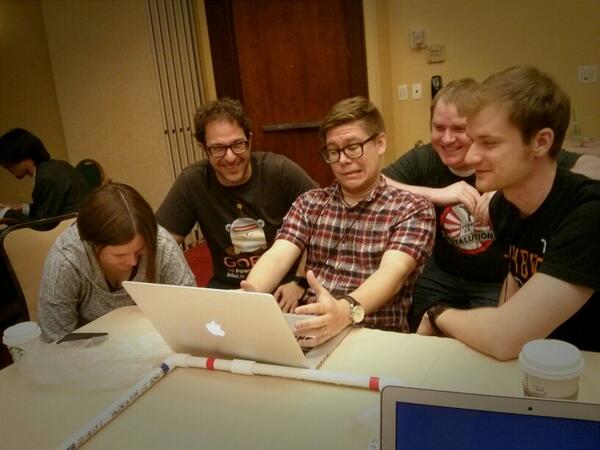 Gobot is split into multiple packages, a core and a few other packages. The gobot team, out of habit chose to put a package per repo. After further discussions, we chose to bring all official packages inside the same repo to keep things easier and to keep the import paths clean and logical.

So instead of having:

All the none-core packages are moved to subdirectories:

Which also allowed us to simplify the following code:

We did that with a few other types and methods all over the packages.

We had a discussion about what lead to the multiple repos vs one repo. There are legitimate cases for both approaches but in this situation, the decision was based on a misunderstanding. The author thought that by importing the top package, all sub packages would also be somewhat included in the build, making the binary bigger than needed. Since Go only compiles and links packages imported, moving all packages within the same repo wouldn’t change the binary output. Note that this is not because in this specific case we have all packages in the same repo that this is the right thing to do every single time.

By conventions, package should contain a doc.go file that contains an overview of the package and often some information so the developer trying to use the library can find the right entry points.

As usual, the standard libraries are a good example, here is the net/http doc.go file.

We spent some time refactoring master.go which is the file implementing the code handling one or multiple robots (which can each have multiple devices).

There are a few things that aren’t really idiomatic in this code. The first thing is that by convention, constructors are usually called New<Type>. Secondly, the community seems to follow the following stylistic choice: only use new and make when you need to set the capacity (make([]string,3)) Finally we don’t need to allocate a variable. Here is the refactored code:

In the original code, we had a variable called trap which was a function living at the top level of the package:

The func was then used to handle signals. The author chose to use a variable so he could mutate it in the test suite and avoid sending an interrupt when testing. We realized we could avoid having this function variable at the top of the package by moving it as a field on the Master type and setting the default func in the constructor.

The code still behaves the same and we can still overwrite the trap function in our tests (since the tests are part of the same packge, the non exported field is available) but we got rid of a top level var.

Reading from a channel

The following code was ranging over a predefined channel (c) of signals. and when a signal would arrive, all robots belonging to the master would be halted and disconnected.

The code above works well but could be cleaned up a little:

This code does the same thing but simpler. We are trying to read from the channel which will block (we don’t care about the result so we don’t capture or could have used an underscore). Then we loop through each robot and stop them. We managed to remove a for loop on the channel (with an odd break) and made the code intent clearer.

Next, we tackled the following method:

The funny thing about this method is that it’s not needed. We could get the same result by calling:

When I said that, someone suggested that it might be a bad idea since FindRobot() might return nil and now we would be calling GetDevice() on nil and bad things would happen. Looking at the code, it was actually easy to fix.

Here is the original code:

Here is the refactored version:

Did you spot the difference? We just added a check to see if the pointer (r) was nil, if it is, we just return nil. When I added the code above, the person who was worried about calling GetDevice() on nil was scratching his head.

Golang does something very interesting (and a bit surprising if you come from a dynamic language), it returns a nil pointer of the type we defined as return type. Let’s walk through the code by rewriting it slightly differently:

At this point if FindRobot() didn’t find a robot, bot is still of type *Robot but the pointer is nil. Because we defined a method GetDevice() on *Robot, we can call:

The GetDevice() method will execute and will return nil right away because we check if the pointer is nil.

The fact that nil pointers have types has 2 important implications, the first one is that you can nicely chain methods without checking at the caller site if the returned value is nil. The second is that your methods should expect to be potentially called on a nil pointer and should properly handle such cases.

Note: Go team member Andrew Gerrand suggested on Hacker News to name the method Device instead of GetDevice. The word Get is almost always redundant. In the same chain of thoughts, maybe we should rename FindRobot just Robot.

I’m writing this post on my way back from GopherCon and there was one more thing I wanted to clean up and share with you. This is a nice pattern I use often to simplify my code.

Our Robot type has a connections field and a devices field:

To avoid always having to manually loop through the slice, a method is defined on pointers to Robot. This method iterates over the devices and halts them:

This code is totally fine but from an API design perspective, wouldn’t it be nicer to use?:

One of the nice things with this approach is that the concept of halting, which really belongs to the devices, doesn’t need to leak into the Robot world.

To implement the suggested API change, we need to define a type alias:

We can now define methods on our new type:

We then need to update our Robot type:

And we are done with our refactoring.

One last note, since we might need to call different methods on our collection we could create an iterator method.

Needless to say that we had fun. The refactoring went much further and we removed the use of reflections, some sleeps and much more. The code is going through a nice cleanup before reaching 1.0 and I can only encourage everybody to play with Gobot, there are very few things as fun as Go and Robots! (The code is open sourced, look at it, add new drivers, send PRs!)

I’d like to thank Ron Evans and the Hybrid Group for open sourcing their code and sharing the fun with all of us. I can’t wait for the next LA Go + Robot hack night.

Finally, Splice is hiring, our stack uses a lot of different technologies but our backend is all in Go and we are always looking for talented engineers. Drop me a line if interested.