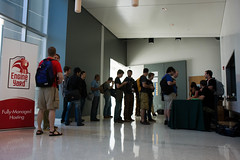 The day started with a Keynote from

Ezra Zygmuntowicz, author of Merb. Ezra covered the past and present of Merb and introduced Nanite: self assembling cluster of ruby processes.

(Carl Lerche) introduced the awesomeness brought to you by the new router.

Yehuda Kats had 2 talks today, one of how to test your app the Merb Way. Here is a quote which sumups the talk pretty well:Â ”If you have to refactor your tests to refactor your code then your tests do not prove your code actually works.“Â  Yehuda also had a 2nd talk later on in the day where he talked about Javascript and why RJS sucks and should be replaced by proper JS (in prototype or jQuery or whatever). 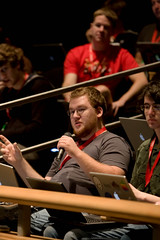 There were some other awesome talks like the couchDb talk, the Sequel talk, getting up and running with Merb and obviously awesome DM.

I have to say that it’s probably one of the best conference I have being part of. I’m certainly biased but I really enjoyed myself. Having a small group of motivated people makes a big difference. We had a great lunch all together, watch a 3xHD video stream during a break and headed to the beach for a sunset BBQ :)

Can’t wait for tomorrow but I need to prep my slides and work test Merb before we release 1.0RC tomorrow. By the way, we setup a new wiki during Merb Sprint and we will need your help to provide “osim” content before 1.0 final.

p.s: someone live blogged most of the talks.