Merb 1.0 is almost ready to be pushed out and you might be impatient to start playing with some of the goodies not yet available in the latest stable release. Before getting started, you should know that not everything has been ironed out yet so don’t expect to have a fully stable Edge.

The easiest way to get started requires that you have git installed as well as a gem called thor.

I let you take care of installing git on your machine, Ruby dev without git became quite challenging since GitHub started ruling the Ruby OSS world.

[caption id=“” align=“alignright” width=“240” caption=“Hops, used primarily as a flavoring and stability agent in beer, and also in other beverages and in herbal medicine.”] 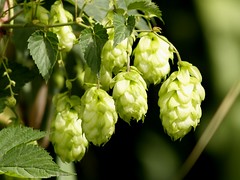 Thor is a sort if mix between rake, sake with a better argument parser and based on Ruby classes.

Thor on its own won’t be very helpful, we need some thor tasks.

Create a folder where you want to store Merb’s source code and cd in it.

You can now look at the available task by doing

At this point you be overwhelmed by the multitude of options, we are working on making things a be nicer for 1.0. But anyways, let’s get started:

The command above will install extlib, merb-core and merb-more from git HEAD. You now have the latest version of Merb’s libs installed locally as gems.

You might also want to install Merb extra plugins, if that’s the case do:

If you decided to use DataMapper instead of ActiveRecord or Sequel, you will also need to install the gems you might need:

Install data_objects and an adapter: (replace mysql by the adapter you want to install)

You should be all setup by now.

** Next time you want to update, just come back to the same folder and do the same thing. Hopefully by then we will have a 1 task solution and will offer a merb-stack version of our gems to let you install everything at once with all setup done.**